I left the hospital on the evening of July 5, 2016, with an oral steroid prescription and instructions to return if my symptoms got worse. Sure enough, less than a week later, six days to be exact, I was back in the hospital for admission and Relapse Number 3; Part 2. 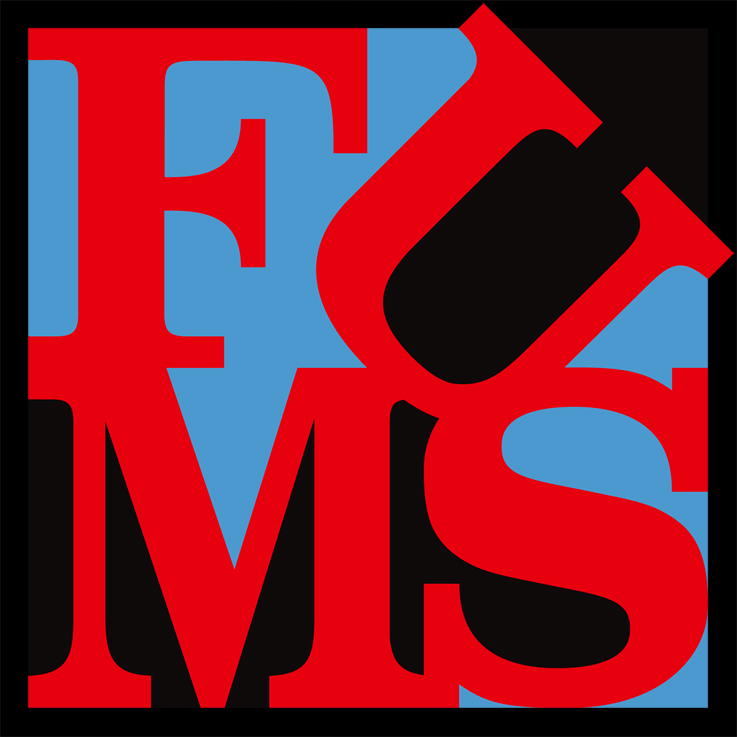 I should have assumed I would not get off so lucky as to have a relapse without a hospital stay. While the numbness slowly progressed during the week I was free from the hospital, it was actually another new symptom that finally prompted me to call my neurologist. Personally, I was prepared to give the the oral steroids their full ten days to work before I gave in and made the call, but my left hand had other plans. By July 7th, not only was I now completely unable to grip anything with it, it had developed a terrible pain that I could only describe as “exploding”. Yup, you read that right; exploding! It felt like my hand was incredibly swollen, puffy, stretched and ready to explode if the pressure was not released ASAP. The pain began dull that morning but by mid afternoon I was in tears trying to convince my husband to just cut off my hand. (Thankfully he knows when I’m being a bit dramatic!) At this point I was wishing it would ACTUALLY explode so then maybe the pain would stop.

When I broke down and finally called my neurologist, I admit I was still not quite ready to concede hospitalization. Not again; not for the third time in just a few months! I was already becoming very skilled at downplaying my symptoms and masking my pain to the outside world. But when your neurologist asks you questions like “how long have you been unable to use your hand?” and “since when has your ENTIRE left arm been feeling weak?”, you are forced to answer truthfully or risk being misdiagnosed or mistreated. According to my neurologist, everything I was telling her made her 100% convinced that the oral steroids were not doing the trick. I needed to be admitted for IV steroids; and this time I needed to stay the full five days. No early escapes this time. Well shit! I knew at this point fighting admission was a battle I would lose.

However, the lawyer in me wanted to negotiate, of course. Even in the face of defeat, I wanted to feel like I was getting something out of this deal. I needed some sort of control. So I told her that I would go, but since according to her, she already “knew 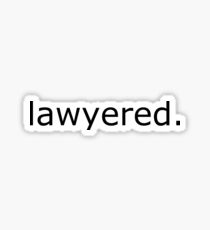 100%” what treatment I needed, there was no reason for me to spend countless hours in the ER being poked and proded by some clueless doctor. I needed to be admitted to the neurology floor ASAP and IV Solumedrol administered every 8 hours for the next five days. I told my doctor that she should have someone call me when a bed was ready. I would start packing and wait for the call but I was not about to hustle my butt down there just to hurry up and wait. Thankfully, she agreed. (I think my attitude gave her little choice.) We hung up and as she went about trying to find me a bed, I started counting down the minutes until the dreaded phone call summoning me back to hospital prison. At least this time I knew exactly what to pack, who to alert, and the precise day I’d be returning home. As pissed off as I was at my MS, at least the frequency of these relapses was helping my learn my disease patterns REAL fast. Quite a bit faster than I would have liked.

Skipping the ER was absolutely the way to go! Total game changer! It took a few hours to get the call from hospital Admitting and Registration that my bed was ready but once I got to the hospital and checked in, I was in my room on the neurology floor within twenty minutes. As I walked to my room I was greeted by the familiar smiles of the nurses and their “oh no! Not again?!?” hugs. I felt like a hospital VIP! And rightfully so as this was my third stay there in five months. I was really getting to know the lay of the hand here. 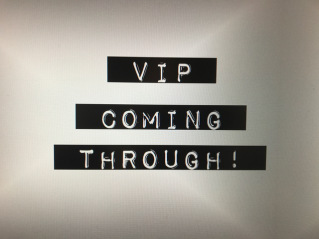 Despite the fact that my neurologist had called the attending neurologist on duty at the hospital and informed him of exactly what I needed, I was still given a hard time when it came to dealing with my “exploding hand”. Yup, they looked at me like I was a crazy person. The IV steroids would eventually help (hopefully) all the symptoms of this relapse settle down but it would take a few days. Solumedrol is not an instant fix; in fact no drug is. There are medications that are  equivalent to putting a bandaid on a symptom until the steroids kick in, but the real healing wouldn’t come for a few days. So what the hell was I supposed to do about my exploding hand in the meantime?!?! Unfortunately for me, the attending neurologist was one of those idiots that believed that MS doesn’t cause pain. This is the BIGGEST myth/lie/misconception about MS!

MS causes pain of all kinds, severity, and in any and all nerves in the body. While I was absolutely convinced this exploding pain was a result of my MS, the neurologist wanted to rule out ANY and ALL other possibilities before she would do anything to treat it; or put a bandaid on it until the steroids started working. She made me bend, flex, and do every hand exercise under the sun until I was in tears from the pain. 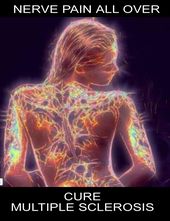 She insisted that she could find nothing wrong with my hand on the outside so she ordered an X-ray. I told her repeatedly that she was wasting her time (and my money!) ordering a test that would show nothing but she didn’t listen. What did I know anyways?!? I was just the patient, not the doctor. This was just another lesson in becoming my own advocate for my health. When the doctor doesn’t listen to you, you must talk louder! Yell if you must! And that is exactly what I did. Again I wasn’t winning any patient of the year awards, but it got me the treatment I needed.

Once that idiot doctor ordered the X-ray and left my room, I paged the amazing nurse who was assigned to my room. She had worked with my on both my previous hospital stays and she seemed to trust my opinions as a patient. I asked her to call my primary neurologist and explain to her what this idiot attending neuro was doing. She informed me that she had in fact already left her a message after overhearing my “loud conversation” with the attending. I LOVE NURSES! Within the hour I was finally given the pain medication I needed to stop me from trying to convince the nurse to cut off my hand. Oh and guess what? The X-ray showed NOTHING wrong on the inside either and cost me over $1,000. You better believe that me and that attending neuro had a lovely chat when she came to deliver those test results. I don’t think she found it as humorous as I did when I asked her if I could borrow the $1,000 to pay for the test since SHE insisted on it. Obviously I know things don’t work this way but I could tell by the look on her face, that question made her think. Maybe she’ll listen to the next patient better. Here’s hoping.

Dealing with all this idiocy was making me pretty frustrated and angry. I needed a little inspiration, some positivity, maybe some reassurance that all this crap I was going through was somehow going to make sense one day. I did a lot of reflecting on life during those five days, questioning my decisions, and honestly, a fair bit of blaming myself too. Once I was done with my little pity party, I found myself laying in bed for hours reading quotes on the internet. (I had lots of downtime and all the steroids made it impossible to sleep!) I read quotes about adjusting to change, overcoming obstacles, dealing with loss, resilience, and everything in between. I’m a sucker for a good quote. (I write them on colored Post Its and stick them all over my house.) Or hospital room in this case. While unable to sleep one night I came across this one that stuck out to me:

MS is not a death sentence, it’s a life sentence. While anyone could step into the street and be hit by a bus; people living with MS have seen the bus. We’ve been hit by the bus and we know that we walk a life along the bus route – with our backs to the traffic.” 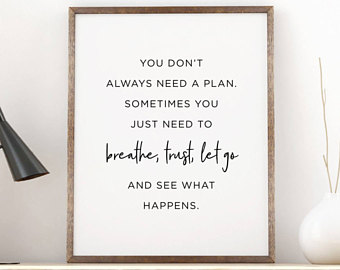 At first, I didn’t fully grasp its meaning. I wrote it on a post it anyways because I wanted to think on it for awhile and come back to it. Finally, it hit me. The realization I had been struggling to make for some time now. After being diagnosed with MS I felt like my life was turned upside down. Also of a sudden, I had to worry about whether I would be able to walk the next day, or see well enough to drive home from work, or be the one to teach my kids to drive, or dance on my 50th wedding anniversary. These were all super scary thoughts to have to come face to face with. Living with MS meant trying to every minute that I could because one day I wouldn’t be able to; and I had no clue when that day would be. It could be tomorrow or forty years from now. 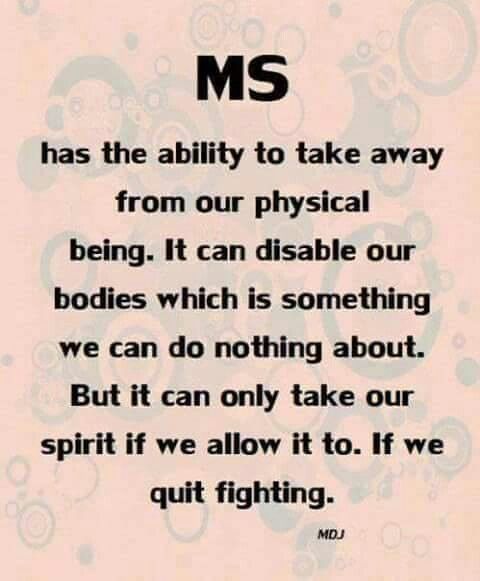 But you know what? NO ONE knows the answers to any of those questions! I didn’t know any of those things for certain before I had MS either; I just never had a reason to think about it back then. Your typical healthy 30 year old doesn’t wake up each day and do a mental check to make sure all her appendages are working. She don’t worry about stopping at the grocery store after work and not being able to make it through the entire store and back to the car before collapsing. These are the thoughts I lived with daily. I was a (almost) 30 year old living my life absolutely terrified of what the next day would bring. I was terrified because I had seen how bad it could be; and I knew that it would get worse. As the quote said, I had seen the bus…shit, I had been hit by the bus THREE times already! But each time I got back up. Each time I learned a new lesson that would help me in my fight against MS. I decided to start considering myself lucky instead of diseased. I was lucky because at the ripe old age of 29 I had seen and fully experienced what it feels like to be completely disabled, 100% dependant on other people; and I had come back from it. I had a new lease on the value of my life; my legs, my hands, my eyeballs…my everything basically! I was ready to crawl out of my pity party and starting fighting with everything I had. Game on MS!